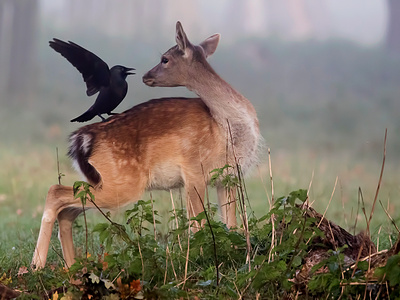 It’s always thrilling to get a photo published in a national newspaper…   but to get it published in THREE in the same week is something rather special!  So hearty congratulations to Val for this wonderful image, and for explaining a little more about how she made it.

‘The image was taken on 9th October when I had left Shaftesbury at 5am to drive to Bushy Park to take photos of the Red deer rut.  On arrival at the park it was very foggy and you could barely see the deer.  The reds were in fine voice and very active.  I spent the first couple of hours photographing them and  dodging behind trees as they were very lively and chasing each other and I didn’t want to get in their way.  I decided to take a break from the reds and found a nice log to sit on in the woods.  Whilst I sat there quietly a number of Fallow deer came along.

I was then able to photograph a number of images including the Deer and Jackdaw series.  I subsequently sent this series to Hotspotmedia who accepted them and were able to get them published in the Guardian, Telegraph and Mirror.  This is the first time I have tried using an agency and was thrilled to have the images accepted and then published.’

Thanks to Val for sharing this image, and to see more of her work please visit her website www.valsaxbyphotography.co.uk