The Bradford Abbas Shield is a local competition between local clubs organised by Sherborne Bradford Abbas Camera Club on an annual basis.  This year, 2014, was the first time that Shaftesbury had been invited to participate, and as the “new kids on the block”, we had no idea how we would fare.  The other clubs were South Petherton, Wincanton and Yeovil, plus of course the hosting club.  The set subject was “Transport” which was why we used this as the theme for our first round of our Shuffell Trophy earlier in October.  From this we had to select five prints and five PDI’s to send to SBACC.  On the night, we were represented by a small delegation of eight who sat quietly together and well behaved at the back of their village hall.

The judge, John Foulkes from Axminster, started reviewing all 25 prints while one member from each club kept a tally of the scores – in our case Mike H.  John warned that in this sort of inter-club competition where all the entries would be expected to be of a high standard, he would nevertheless use a wide range of scores to make sure there was a good separation between the five clubs.  After ten prints had been judged, the scores ranged between 19 down to 11, with Shaftesbury scoring a 19 and a 12.  Worrying…

As the first half of the competition drew to a close however, our team were rather happier having scored one of the three 20’s and an 18.  A quick bit of maths by Mike showed us just in the lead with 84 at tea break, ahead of Yeovil on 81.  During the second half, we started by getting two 20’s, the only ones awarded for PDI’s, and thus built a very strong lead in the PDI class as well. 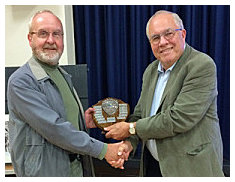 The final tally gave us a 17 point lead over the rest of the pack, led by Yeovil in second place.  David L was presented with the Bradford Abbas Shield by the judge, John Foulkes .   This is the first trophy we have won  —  we promise to look after it well and to bring it back next year!

It would have been a very enjoyable experience even if we had not won and many thanks to Sherborne Bradford Abbas and the other clubs.  And of course to a very good judge!!!